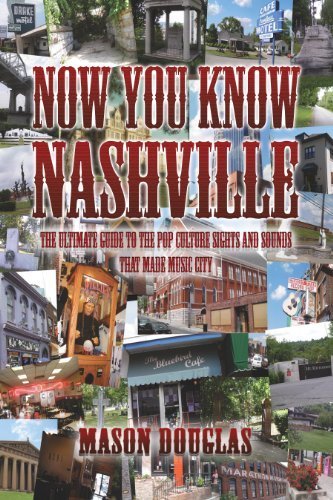 The 2nd edition of NOW YOU KNOW NASHVILLE adds over 50 new sites on the tour of the iconic structures of the city such as the famous Ryman auditorium, the WSM "diamond" tower, and the Batman building, RCA Studio B, the Hermitage Hotel, to name a very few, along with their Pop Culture significance!

Features all the houses and locations from ABC's hit TV show, Nashville! See Rayna & Teddy's mansion; the houses of Scarlett, Gunnar, and Deacon; the local production studios; and all the local hotspots featured in the show!

Includes a guide to the world-famous studios of Nashville, where hundreds of your favorite songs were recorded.

The specific houses and locations where dozens of your FAVORITE HIT SONGS were written, along with the "stories behind the songs" including "Chattahoochie", "The Dance", "I Will Always Love You", "Somewhere With You", "I Love The Way You Love Me", "Crazy", "Only The Wind" and many, many more!

Exact FILMING LOCATIONS from the ABC hit TV show, Nashville, as well as The Matrix, Hannah Montana, Walk The Line, the Ernest movies, and many others.

The seedy details of NASHVILLE'S DARK SIDE with sites of infamy such as the worst train wreck in United States history, the secrets of Printers Alley, the sites of infamous murders, and even the peephole that launched Erin Andrews career.

FAMOUS GRAVES of dozens of celebrities and their locations.

Famous food and RESTAURANT LOCATIONS that give Nashville it's own unique flavor and culinary history!

The HISTORY OF NASHVILLE from the cave where Timothy Demonbreun hid from Indians...to monumental Civil War locations...to sites instrumental to the founding and development of Music Row ...and even the first location that Jimi Hendrix used the name "Jimi"! ...PLUS HUNDREDS MORE!!!

Save this product for later
Display prices in: USD